‘Iolani student athletes in all levels and divisions ended another fulfilling year in a variety of sports. Here are the end-of-season results for varsity teams in the Interscholastic League of Honolulu and at the state level.

Year of Firsts For ‘Iolani Golf

With the return of seniors Lorens Chan ’12 and Marissa Chow ’12, the 2012 season began with a promising outlook. Both teams did not disappoint. 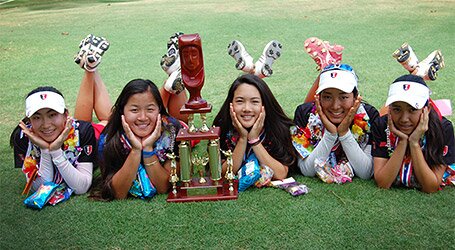 Rose Huang ’15, Marissa Chow ’15, Keilyn Ing ’15, Hana Furuichi ’15, Ayumi Sakamoto ’15
The girls team, comprised of five freshmen along with Marissa (Hana Furuichi ’15, Rose Huang ’15, Keilyn Ing ’15, Kristi Koyanagi ’15 and Ayumi Sakamoto ’15) finished the regular season as ILH champions. The team won 6 of 10 regular season tournaments to win the school’s first ILH title ever in golf. Chow ranked first with the lowest season average of 71.6. She was named ILH Player of the Year for girls. The team took the momentum from the regular season title into the David S. Ishii Foundation HHSAA Girls Golf Championship at the Wailua Golf Course on Kaua‘i and won the school’s first State title in girls golf. The team finished the two-day tournament with a score of 454, 7 strokes ahead of 5-time champion, Punahou. Individually, the team was led by freshman, Rose Huang (71-75 146) who finished second, 1 stroke behind Kaci Komoto of Punahou. Other members of the State Championship team included Keilyn Ing (76-78 154), Hana Furuichi (75 - 80 155), Marissa Chow (75 - 80 155), Ayumi Sakamoto (76 - 80 156). 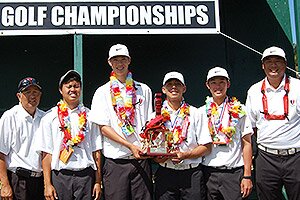 Coach Glenn Inouye ’69, Eric Le ’13, Trey Kidd ’13, Reese Suzuki ’13, Lorens Chan ’12, Coach Matt Ma ’03
The boys finished the ILH regular season third behind Kamehameha and Punahou. The team was led by 2012 ILH Player of the Year Lorens Chan, who was ranked first, with a season average of 67.6 (5 scores total 23 under par). The boys went into the HHSAA Boys Golf Championship as underdogs to OIA Champions Moanalua and ILH Champions Kamehameha. With the minimum of four qualified players, the boys embraced the One Team spirit and finished a respectable runner-up to Moanalua (585 - 593). 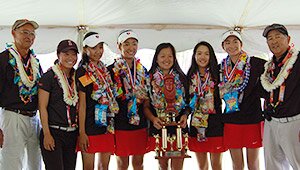 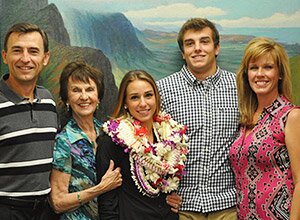 She will compete on the Horned Frog track and field team. She signed her letter in the Headmaster’s Office with her parents,‘Iolani administrators, coaches, teachers, and friends in attendance.

Congratulations go to all student athletes for exemplifying the One Team spirit on and off the playing field. 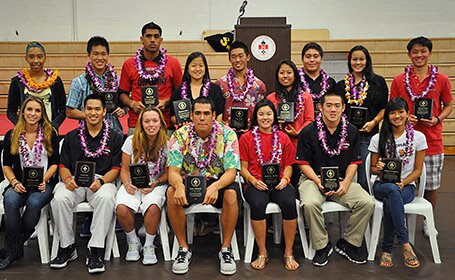 Student-athletes received major awards at the Athletic Awards Assembly on May 23.

to the senior athletes who best exemplify the ‘Iolani spirit

to the seniors, who through exemplary personal effort within their personal God-given abilities, have achieved distinction in both athletics and academics, thereby perpetuating the memory of Tim Scott, for whom this award is named

to senior student athletes who best exemplifies the highest standards of personal excellence and sportsmanship for teammates and school.

to the seniors who best exemplify the combined qualities of leadership, scholarship and athletic ability as determined by the Headmaster

to the underclass persons, who in the past year most unselfishly and sincerely helped to promote good sportsmanship and fair play, who are most inspirational and best exemplify determination, courage and desire