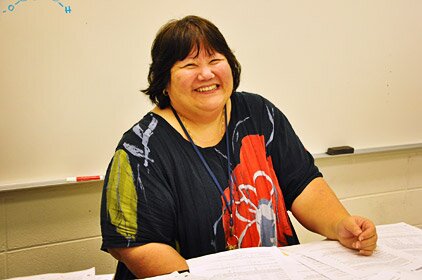 Pamela Fujinaka makes chemistry click for all of her students.

Up, up-down, up-down, up....are the metalloids! If you’ve heard this cheer at an ‘Iolani baseball practice, then you, too, have been touched by the teachings of chemistry teacher extraordinaire Pamela Fujinaka!

“Fuj,” (pronounced fooge)  as she is affectionately called by students, has been rockin’ the halls of ‘Iolani since 1979 when she was hired by the Rev. David P. Coon to replace retiring teacher, Rose Pickering, as the sole chemistry teacher at ‘Iolani School. Through Fuj’s foresight and guidance, ‘Iolani has seen the chemistry program expand from about 90 to 100 students per year in 1979 to nearly 250 students currently enrolled in a first year chemistry class. Whereas in the past there was only one chemistry course offered for all first year students, today there are three types of first-year chemistry courses in addition to a second-year, AP chemistry class. And now, instead of just one chemistry teacher, Fuj shares the science office with three other full-time and one part-time chemistry colleagues.

Fuj is not just a teacher of chemistry. Since she was a student at James Campbell High School in Ewa Beach, long before “service learning” became an educational buzzword, Fuj has been passionate about the virtues of performing community service.

She introduced ‘Iolani School to Key Club, one of the largest service groups currently at this school, and has been the ‘Iolani Key Club advisor since its inception. In addition, she has been a Kiwanis Regional Advisor (2006-2009), a class advisor for the Classes of 1983, 1991, 2003 and 2008, and an advisor for the ‘Iolani Science Bowl team (1998-2002) which won the State Science Bowl Competition in 1999 and 2002. The invaluable guidance she dispenses to the young adults in these extra-curricular organizations is drawn from her many years of personal experience blended with a healthy dose of good, old-fashioned common sense.

In 2000, Fujinaka was awarded The Presidential Award for Excellence in Mathematics and Science Teaching, the nation’s highest honor for teachers of mathematics and science, and she travelled to Washington D.C. to meet then-President George W. Bush. In addition, when former student Kellie Young ’07 was honored as a Presidential Scholar, she named Pamela K. Fujinaka as her most influential teacher.

Fuj has a way of making difficult-to-remember ideas—like which elements are metalloids—fun to learn and easy to remember, and few students can ignore or forget the impact of her teaching. “Enthusiastic!” is how Logan Nowack ’12 describes her. She demands much from her students and sets high standards for them and, in that way, helps them achieve their greatest potential. She is generous with her time when students seek extra help for she cares deeply about their learning.

Not only is Fuj a teacher of chemistry, she is always and foremost a student of teaching who constantly examines, evaluates and reinvents her teaching methods to enhance her students’ learning.

“The wonderful thing about Fuj is that she models lifelong learning,” says Debbie Yoshino ’84, ‘Iolani’s technology coordinator. “While she’s not the most tech-savvy person, she was eager and willing to learn how to integrate technology into her chemistry class. Fuj is not only an excellent teacher, but a great student too!”

Fuj has been both an attendee and a presenter at numerous workshops for chemistry teachers, and freely shares newly learned science demonstrations and cool gizmos with her colleagues.

During a recent presentation by Tony Wagner, Co-Director of the Change Leadership Group (CLG) at the Harvard Graduate School of Education, in which he outlined his plan to close the global achievement gap, Fuj became captivated with Wagner’s ideas on how current day students learn, how their experiences and ability to access information has changed and, how by being more aware of this, teachers could be more effective in connecting with their students.  She proceeded to make extensive changes to how she taught her ChemCom (Chemistry in the Community) classes. Rather than rigidly adhering to the text book, Fuj replaced her traditional fourth quarter topics with student-generated team projects.

Students formed their own groups, selected an area of chemistry that most captured their interest, identified a Hawai‘i-based topic to research, arranged and conducted a community service project in that area, tapped their imaginations to fashion a creative project to accompany their research, and made oral presentations to their peers, parents and anybody from ‘Iolani who wished to attend. This project was so radically different from her past methods of teaching that she sought out many other specialists on campus—computer experts, English teachers, the Hawaiiana teacher, other science teachers, art instructors, and the service-learning coordinator—to ensure that students had access to all the support they needed in order to succeed in their chosen topics of study.

“One of the most gratifying aspects of this project,” says Fujinaka, “is its multi-disciplinary nature which utilizes so many of the talents already assembled here at ‘Iolani School in a true embodiment of the One Team Spirit.”

How can one individual accomplish so much? Well, my theory is that she doesn’t spend much time sleeping. Fuj is at her desk by the first rays of dawn and is one of the last people on campus to switch off her room lights late into the night. In fact, if she didn’t show up each day wearing different clothes, one might think that she lived here at school. But I’m willing to bet that, even when away from this campus, her thoughts are never very far from ‘Iolani.


Chemistry teacher Gail Tuthill is a colleague of Pamela Fujinka.