The ‘Iolani boys varsity bowling team “spared no effort” and “struck while it was hot” in capturing the 2010 ILH bowling championship.   The team completed the season with 36 wins and 3 losses. The last time an ‘Iolani boys team won a championship was 30 years ago. They travelled to the 2010 HHSAA State Bowling Championships on Kauai from October 27 to 29. Team members are Westin Fabro ’12, Reid Gomoto ’11, Alexander Ko ’11, Trent Nakamura ’11, Eland Tsubata ’11, Tyler Ushio ’12 and Curt Wong ’13. 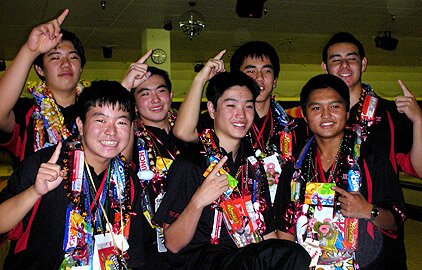 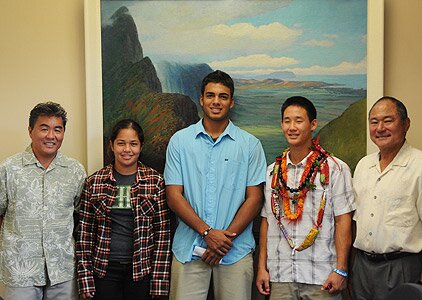 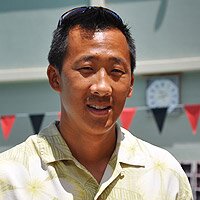 ‘Iolani defeated Punahou, 10-8, to win the ILH boys water polo championship title at the ‘Iolani pool. It was ‘Iolani’s first championship since 1999.

“Plenty of hard work went into preparation of this season,” coach Randy Bart ’82 wrote in an email.

Kacy Johnson ’12 and Connor Grune ’12 each scored four goals for the Raiders. David Lim ’11 and Chris Nichols ’11 each contributed a goal. Austin Strong ’11, Timmy Leong ’14, and Zalman Bernstein ’12 played significant roles on defense, keeping Punahou’s big shooters out of position and confused. Tom Hartwell ’11, Thomas Schowalter ’13, and Jacob Butters ’11 logged significant minutes to make an impact. The rest of the team gave emotional and verbal support throughout the match.

The “One Team” spirit built up as the game progressed. The boys got big lifts from the cheering crowd.  The crowd played a big role in helping lead the team to its victory. 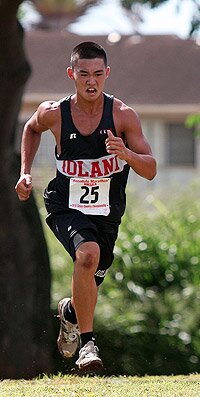 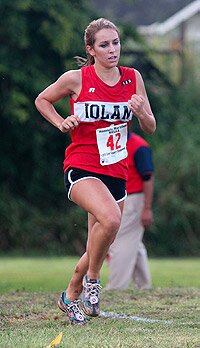