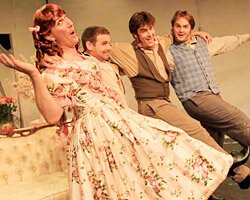 Hawaii Pacific University Photo
Theater teacher Rob Duval played the main character in the Hawaii Pacific University production of the Mark Twain play, “Is He Dead?” Written in 1898, the play was not  produced until David Ive’s adaptation opened on Broadway in 2007. Honolulu Star Advertiser reviewer John Berger wrote on November 16 that Duval delivered “a winning performance.” 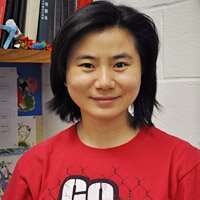 Tracy Feng is a new Chinese teacher.
Tracy Feng has joined the Upper School language department as a Chinese teacher. She earned her bachelor of arts in Chinese Language and Culture from Fudan University in Shanghai, China. Prior to ‘Iolani, she was a a full-time Chinese teacher for international schools in Shanghai, Guangzhou, and Nanjing for eight years. She believes in lifelong learning and feels enriched by teaching. “As a Chinese national, I value the chance to work with ‘Iolani students and help them realize their potential,” Feng said. In her leisure time, she enjoys jogging, reading, and watching movies and plays.

Art teacher Holly Chung has been granted a sabbatical for the spring semester of the 2011-12 year. She will research the historical development of Western contemporary art and develop strategies to make art history a stronger component of the mixed media curriculum and other courses.

Economics teacher Dick Rankin will take a sabbatical in the fall of2011. He will visit Russia and the former Soviet Block countries which are making the transition from communist governments to market economies. He will also compare the economic systems of China and the United States and meet educators from around the world.

Japanese language teacher Elsie Yoshimura plans trips to California and Japan during her sabbatical in the spring of 2012. She plans to enhance her Advanced Placement Japanese Language and Culture course through extensive classroom observations and meetings with educators.

English teacher Nathan Zee has been awarded a sabbatical for the 2011-12 year to complete his dissertation and earn his doctorate degree from the University of Hawai‘i at Mānoa. He hopes to incorporate his study of cinema and visual narratives with his English courses on literature.