Ideas for the World
Read the full story » 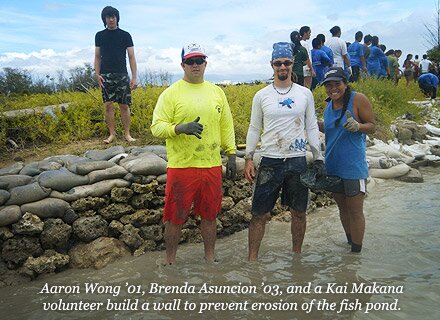 Members of the ‘Iolani Community Action Network (ICAN) on June 11 celebrated World Oceans Day by restoring one of the last remaining traditional Hawaiian fishponds. In collaboration with Kai Makana, over 50 ICAN volunteers donned their red ICAN shirts, tabis, and sunscreen and paddled over to Mokauea Island for a day of service. This group represented the widest array of volunteers to date, with alumni spanning over 45 years.

Joni Bagood, a resident of Mokauea Island, provided ICAN with a brief history of the island and the significance of volunteer efforts to restore the fishpond. In 1975, the State of Hawai‘i forcefully evicted the residents of Mokauea on charges of trespassing, burning down two homes in the process. Forming the Mokauea Fishermen’s Association, the residents managed to win back their island, negotiating a 65-year lease with the State. The goal of the Mokauea Fishemen’s Association is to restore the culture and environmental sustenance of the island. The restoration of the fishpond plays a key role in achieving this goal.

The ICAN team was tasked with constructing a wall to prevent future erosion of the fishpond. Putting the One Team philosophy into action, members of ICAN transported large coral rocks from the outer reef to the pond’s edge to construct the wall’s foundation. In addition, volunteers dredged the bottom of the pond to deepen the fishpond and create bags of silt to help stabilize the wall. With hard work and great company, ‘Iolani alumni came together with members of the community for a successful day of service.

The next ICAN was the 2nd annual “One Day, One Team” event on October 8, 2011. This year ICAN held projects on Oahu and in Boston, New York, San Francisco, Tokyo and other places around the world.