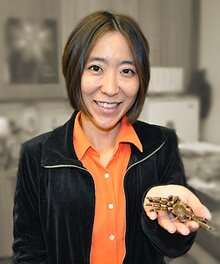 Dr. Cheryl Hayashi ’85 holds the skin of a tarantula.
No longer are they seen simply as bugs. Dismissed is the notion that they are pests. The way students perceive spiders is forever changed. They have a greater appreciation after an inspiring two-week teaching residency by Keables Chairholder Dr. Cheryl Hayashi ’85.

Hayashi is a spider silk biologist and an associate professor of biology at the University of California, Riverside.  In 2007, she received a MacArthur Foundation grant of $500,000 for her research on spider silks. It was the highest honor a researcher can achieve, said her former 'Iolani teacher “Papa” Jack Kay.

Spiders use their silks for safety lines, reproduction, protection and prey capture. There are 39,000 described species of spiders in the world and many more that have yet to be discovered. 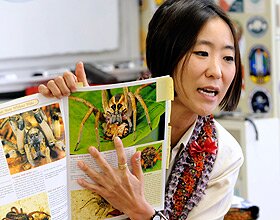 One perk of teaching kindergartners was receiving unconditional hugs after class.
At ‘Iolani, Hayashi shared her joy of learning and her expertise on spiders with students from kindergarten to twelfth grade, faculty from a variety of disciplines, and the general public with a lecture. She spoke to students in chapel about finding her own passion for spider silk research.

“We are all pieces of a jigsaw puzzle, each of us contributing our own gifts and talents to the tapestry of life,” she said.

A fan of show-and-tell then ask-and-discover, Hayashi also brought the skins of tarantulas to share with teacher Kathe Warner’s ‘82 sixth grade science classes. Not to worry, she told the students. The real spiders are safe in her lab back at UC Riverside. She brought only the skins which were dark and furry and looked like real spiders. The students began passing them around. Suddenly, one student screamed! 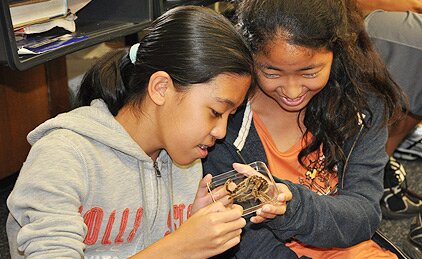 Two students feel a spider skin.
“Don’t be afraid of them,” Hayashi reassured. “They’re not spiders. They’re just skins. It’s like being scared of a jacket.” 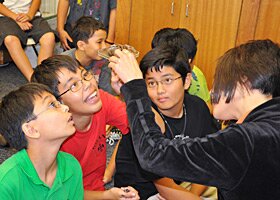 
After graduating from ‘Iolani, Hayashi entered Yale University where a biology class triggered her passion for science. She answered a help wanted ad for someone to feed laboratory spiders. That experience introduced her to a whole new world.

Hayashi earned her B.S. from Yale in 1988 and a Ph.D. through a joint program with Yale and the American Museum of Natural History in 1996. She was a postdoctoral fellow from 1996 to 2001 at the University of Wyoming and in 2001 joined the faculty of UC Riverside. 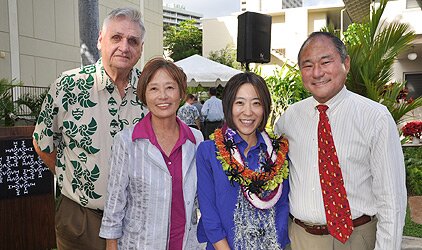 Returning to ‘Iolani to serve as the Keables Chairholder was an unexpected honor, she told faculty at a reception celebrating her residency. Teaching in the classrooms where she was once a student spurred reflection, but the best part about serving as the Keables chair was getting unconditional hugs and, ‘Thank yous,’ from the kindergartners.

“You don’t get those when you teach in college,” she said, smiling.

Since its establishement in 1982 by the ‘Iolani Board of Governors, the Keables Chair has flourished with an increase in supporters and a respected reputation. The program has brought in visiting teachers from a variety of backgrounds, yet they share the mission of carrying on the legacy of the late English teacher Harold Keables who taught at ‘Iolani from 1965 to 1980 after 30 years in the Denver public school system. He was named Life magazine Teacher of the Year in 1960 and died at age 82 in 1982. Keables’s commitment to excellence continues through the chair in his name, which is funded by donations from alumni, colleagues, faculty and friends. Dartmouth College Shakespearean Studies professor Dr. Peter Saccio, U.S. Poet Laureate Billy Collins, designer and mathematician Scott Kim, Columbia University Jazz Studies professor Dr. Robert O’Meally, and journalist and playwright Lee Cataluna are among past Keables chair holders.

Hearst Newspaper editorial cartoonist and two-time Pulitzer Prize winner David Horsey will serve as the 2011 Keables Chairholder. His cartoons are syndicated by Tribune Media Services and distributed to more than 250 newspapers across the country. He has also been the editorial cartoonist for the Seattle Post-Intelligencer for three decades. His website is www.davidhorsey.com. 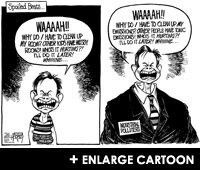