On February 25 to 17, Hawai‘i Theatre became the venue for the school’s annual spring musical. In Kiss Me, Kate, the plot centers around a stage cast in Baltimore opening a musical version of Shakespeare’s Taming of the Shrew, yet the actors in Shrew comically and forlornly reveal their own backstage dramas. The Broadway musical won a Tony in 1999 or Best Revival of a Musical. 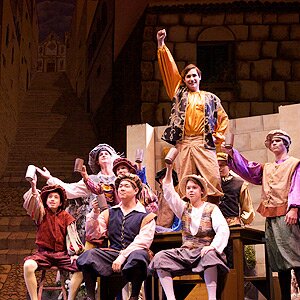 During The Taming of the Shrew scenes, the songs focused on the roles of men and women. See more photos »
The cast featured more than 50 students, from seventh through twelfth grades, with Claire Mosteller ’10 as assistant director, Sarah Chang ’10 as stage manager and many other students serving as crew and technical heads.

Beautiful sets were designed by Willie Sable and the upstage curtain was the original used for the Broadway production and rented for ‘Iolani’s performances.

The ‘Iolani musical production is an annual event that the entire community anticipates each spring. Bravo! 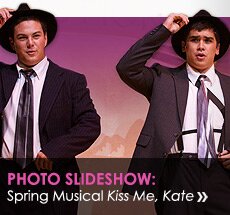