Once upon a time ‘Iolani teachers were not teachers just yet. They were children and teenagers like the ones they now instruct. Find out which childhood books inspired our teachers.
Read the full story »

The School in Focus

Aduei Riak speaks to students at ‘Iolani about her journey as a ‘Lost Child’ of Sudan.
When Aduei Riak stood before a classroom overflowing with curious students, she first posed the question, "What do you know about Sudan?"

Most answers were initially limited to single word or short sentence answers: hot, in Africa, near Darfur.

A short 45 minutes later, after Riak’s speech, students gained a deeper appreciation for the plight of Sudanese refugees and the tragic, unspeakable genocide of 2.5 million people there.

“I am here today because so many people invested in me,” she said. Her visit to 'Iolani last October was made possible by the Berit Mexia Peace Institute and teacher Peter Greenhill.

When Riak was between three and six-years-old, she walked more than 1,000 miles over months and months to flee a civil war in her homeland of Sudan. The war began after the British government handed control of its colony, Sudan, to Egypt. However, southern Sudan is an oil-rich region, and the French government wanted access to this oil. Greed, racism and politics entered the picture. A civil war erupted in 1983 which resulted in 2.5 million deaths and 5 million people being displaced, Riak said.

In 1987, Raik and her family were forced to leave their home in southern Sudan and to walk to Ethopia, crossing desserts and rivers. She suffered for five days without food. She felt like giving up, if not for the insistence of a stranger who told her to keep walking or he would kill her himself.

She eventually found her way to a refugee camp in Kenya.

“I’ve seen a lot of things that a person of my age should not have been exposed to,” Riak was quoted in USA Today as saying. “The (memories) tend to be very dark and gray. I don’t like talking about them, because for me talking about them is living them again.”

Then in 1999, the U.S. State Department, the United Nations High Commissioner for Refugees and other advocates launched a program that resettled 4,000 refugee children in cities across the United States. Only 89 girls came as part of that program. Riak was one.

Speaking little English, at age 16, she arrived in Belmont, Massachusetts to live with a foster family. She was helped by neighbors, friends, and teachers and she eventually graduated from Brandeis University. Riak returned to Sudan in 2006 to visit a refugee camp and saw her mother and father for the first time since she left.

She is now in law school and wants to use her education and experience to help people. She also visits schools, like ‘Iolani, to spread to increase awareness about Sudan and her country's lost children.

Dressed in Raider colors, Kim Roy ’11, Elissa Minamishin ’10 and Alex Tom ’11 lead Cheerfest which rocked the gymnasium on October 31.
It happens only once a year, but the power-packed week provides enduring enthusiasm and school spirit. Homecoming took place during the last week of October with students and alumni participating in several fun events. The week was capped off with Cheerfest, Ho‘olaule‘a, Burning of the I, and the football game all taking place on October 31.

The Class of 2009 showed their senior spirit during Homecoming Week.

Director and theater teacher Rob Duval cast the play with talented and funny thespians who auditioned months before performances. Costumes by Peggy Krock and the set by Willie Sabel were reminiscent of 16th century France. Music was arranged by Wayne DeMello and John Alexander, and flight choreography was done by Tony Piscuilli. Students ran crew, backstage, lighting, and choreography. The entire production was professionally directed, well staged, and, above all, comical. 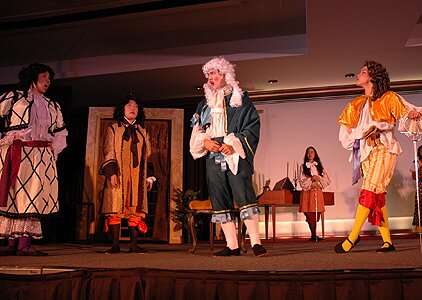 Satsu Holmes ’10 as the Dancing Master, Sami Tasaki ’09 as the Music Master, Kevin Duong ’09 as the philosopher, and Claire Mosteller ’10 as the fencing master quarreled over who is most important.


Matt Hirokane ’09 as Count Dorante and Jackie Mosteller ’10 as The Marchionesse Dorimene flaunted their infatuation.
French playwright and actor Moliere’s farce Le Bourgeois Gentilhomme was translated by Miles Malleson as The Prodigious Snob.
The story centers around a nouveau riche bourgeois gentleman, Monsieur Jourdain, who makes a fool of himself by trying to impress others with his importance and wealth.

Blaire Tolentio ’09 as Nicole, Chaz Silva ’09 as Covielle, Jon Lee ’10 as Cleonte, and Amelia Linsky ’09 as Lucille were a funny foursome.
The performing arts department will present the musical Pippin at Diamond Head Theatre from February 25 to 28. For tickets or information, call 943-2244.

Kindergartners paused before picking a pumpkin.
Kindergartners and first graders participated in the annual Pumpkin Patch celebration, all the while learning about the fall season from their teachers and school administrators wearing overalls and country duds.
The annual event culminated on October 16 with a square dance and sing-a-long in the gymnasium followed by pumpkin picking on the lawn of the Headmaster’s residence. Dressed as farmers, each student got to take home the orange gourds but not after weighing, measuring and learning more about where the squashes come from and how they’re carved and prepared for eating.

Sponsored by the ‘Iolani Peace Institute, Professor Mick Dodson spoke to students in Hawaiian history and culture classes about the issues facing Indigenous Peoples.
Professor Mick Dodson is a member of the Yawuru peoples, the traditional Aboriginal owners of land and waters in the Broome area of the southern Kimberley region of Western Australia. Currently Director of the National Center for Indigenous Studies at the Australian National University, he spoke to students in ‘Iolani’s History of Hawaii and Hawaiiand studies courses last October about land rights and other issues affecting Aboriginal and Torres Strait Islander peoples.

‘Iolani hosted a visit by 22 Indonesian educators from Islamic primary and secondary boarding schools on November 4 to gain insight towards their culture and teaching methods. Likewise, the guests sought to learn more about Western curriculums.

The Indonesians visited chapel services and classes in upper and lower school before speaking more formally on four topics of conversation:  An introduction to Islam, a Mini-introduction to Arabic, Women in Literature and Society, and International Relations Between Indonesia and the United States.

The group also spent two weeks visiting schools across the country.  The program investigated how schools can best prepare youth to live and work peacefully and cooperatively with diverse communities at home and across borders in a fast globalizing world of the 21st century.

The exchange helped fulfill the mission of the ‘Iolani Peace Institute which is to gain a better appreciation of one another and of our common desire for peace in our world.