‘Iobotics: The Roar of Scoreboards, the Flash of the Crowd
Read the full story »

Students on Mission to Change the World

“They said they want to help! They want to do something,” he responds.


Five refugee tents were set up in the courtyard of ‘Iolani School. Each tent represented a period of genocide that has occurred in the world: Armenia in 1915, the Holocaust in 1938, Cambodia in 1975, Rwanda in 1994 and Darfur in the present.
Five more students may seem like a small numbert, but to Busekrus and his classmates, it’s another step towards changing the world – for the better.

Busekrus is passionate about spreading awareness of the ongoing genocide in Darfur so that the suffering ends and so that peace will come to those who must endure war and the constant threat of death.  He along with his classmates produced an award winning video (http://bit.ly/a3DxNC) contrasting life in Darfur against life in the U.S. that was entered in the Olelo Youth Xchange Video Competition in March.


Each tent included educational materials and photographs to spread awareness of the horror of genocide.
Then on May 7 and 8, the students decided to stage a mock-refugee camp to further increase attention towards the plight in Darfur.
Camp Darfur, an interactive educational exhibit, is somewhat like a traveling refugee camp that raises awareness and examines Sudan’s Darfur region and its humanitarian crisis – genocide – by placing it in historical context.

“We are so fortunate here, yet others around the world are suffering. We just want to do something to help,” says Busekrus.


Katie Jay Scott of Stop Genocide Now spoke to students about the situation in Darfur.
Camp Darfur is a project of Stop Genocide Now and i-ACT, a grassroots team that seeks to change the way the world responds to genocide. The camp visits different schools across the country. At ‘Iolani, students answered questions and provided information about how to help as visitors and other students came through the camp.


Ashley Ellison ’13 holds up a drawing done by a child in Dafur of soldiers, guns and bloodshed.
Student Ashley Ellison ’13 described a square canvas with drawings on both sides: one created by a child in Darfur and the other made by an American child. The one created in Darfur depicts people holding guns, bloodshed and dying. The one from the U.S. is of flowers, trees and parks.

“The contrast is real and sad,” Ellison notes.

Students are learning that while ending genocide seems like an enormous challenge, it all begins by helping individuals. The names and photographs of children in Darfur were put on badges. ‘Iolani students wore the badges to symbolize their support and desire to help those suffering.


Badges with photographs and names of children living in Darfur were worn by students. 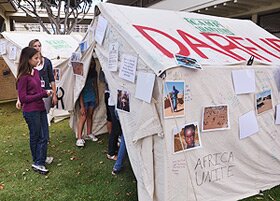 Inside each tent, were news stories, maps, and other educational presentations.
Katie Jay Scott and Gabriel Stauring of Los Angeles-based Stop Genocide Now spoke  to students at ‘Iolani about the humanitarian crisis of genocide by placing it in a historical context with Armenia, the Holocaust, Cambodia and Rwanda. Their visit to ‘Iolani made a lasting impression.

“I am amazed by how our students are so passionate about this cause,” says Yasunaga-Frith. “They all want to help. They all care. And they all know that somehow they can make a difference.”

No comments yet. Be the first to share your thoughts!
Have something to add? Join the discussion now.
Print this Page