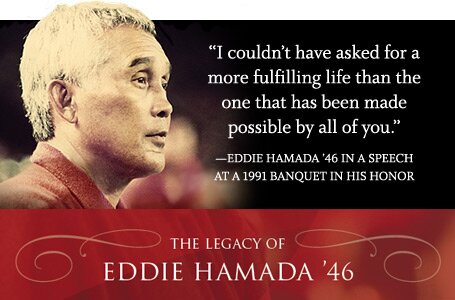 The Legacy of Eddie Hamada ’46 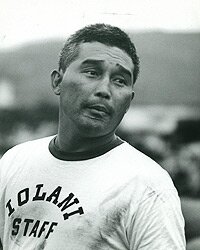 The world is a better place because of Eddie Hamada ’46. Simply put but that is nonetheless the truth.

‘Iolani School’s legendary athletic director, coach, teacher, mentor, friend and graduate, Hamada had a lifelong association with the school. He died peacefully at his home on January 3, 2010 at the age of 81. Yet the positive impact he made at ‘Iolani and beyond continues. The lessons he taught to players, colleagues, fellow coaches and teachers, family and friends are ingrained in their hearts and minds.

The legacy of Coach Hamada lives on.

Nearly 2,000 people attended the service with many traveling from both coasts and across the country to pay their respects. Former Raider teammates were reunited. Coaches and players from OIA, neighbor island, and other ILH schools turned out. St. Alban’s was filled with beautiful wreaths and a large portrait of Hamada taken one year ago. Cynthia Hamada, his wife of 30 years, selected the photo herself. 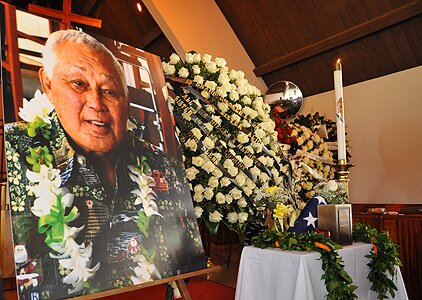 A large portrait of Eddie Hamada ’46 was surrounded by wreaths in St. Alban’s Chapel. See more photos »
The line of people wishing to greet Hamada’s family extended from the center of chapel, out the front door, along the pathway beneath the flag pole and out to the asphalt of Convention Drive. That was before the official three-hour visitation began at 9 a.m. Soon, the line moved to beneath a large tent on the Upper School side of chapel to protect visitors from a light rain.

At the front of the chapel, Cynthia Hamada took time to thank each visitor personally for their warm wishes, as did Eddie Hamada, Jr. ’73 and Tane Hamada.

The Rev. Daniel Leatherman and The Rev. Norio Sasaki presided over the service which opened with the hymn Amazing Grace and concluded with the ‘Iolani alma mater. In between, seven people (Headmaster Dr. Val Iwashita ’67, Larry Price, Larry Cundiff '55, The Rev. David P. Coon, Dr. Steven Dang, Dale W. Lee ’66, and Cynthia Hamada) shared remembrances, each conveying unique and special descriptions of a man beloved by so many. 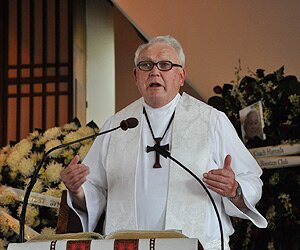 Retired Headmaster Rev. David P. Coon recalled how Eddie Hamada contributed to the diversity and vibrancy of ‘Iolani because of his ability to relate to all students regardless of social poise or background. See more photos »
“Eddie saw the transition of ‘Iolani from a unique perspective,” Coon recalled. “It takes a special person to thrive in a changing environment. Eddie managed to keep one foot in Nuuanu (where ‘Iolani was formerly located) and the other in the rapidly evolving school that became ‘Iolani of today.”

Born on January 27, 1928, Hamada attended Ka‘ahumanu Elementary School and eventually came to ‘Iolani where he played football under Father Kenneth A. Bray who founded the school’s athletic program and instilled the philosophy of One Team in Hamada, who eventually carried it on through his own way of life.

When he graduated from ‘Iolani's campus  in 1946, no one could have known that he would eventually return to his alma mater to make a monumental impact on not only the athletic department, but on also the entire 'Iolani and Hawai'i communities as well.

Hamada attended Emporia State College and earned a teaching degree, then returned to ‘Iolani as a math and typing teacher and coach in 1959. He became head football coach in 1960 and athletic director in 1963, carrying on the One Team legacy of discipline, teamwork, humility and respect.

Under Hamada, Iolani won ILH football championships in 1968, 1972 and 1980. He retired from coaching in 1988 and as athletic director in 1991. That year, the school named its track and field after him, and he uncomfortably accepted the honor as garnering individual recognition was never his goal. After his retirement, he continued to play an active and integral role at ‘Iolani and in the high school sports community.

Hamada served as the boys basketball coordinator for the Hawaii High School Athletic Association, was a member of the voting board of the Hawaii Interscholastic Athletic Directors Association and served on the election committee for the Nissan (now HHSAA) Hall of Honor scholarship/awards program. 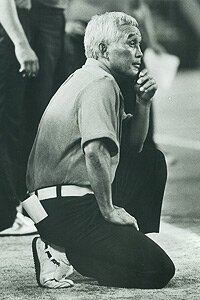 He spent his lifetime giving back. See more photos »
No job was too big or too small for him. He even drove the ‘Iolani school bus during summers for the recreation program.

“Blessed are those who help others, and Eddie was so blessed,” said Rev. Coon at the memorial service.

Donations are being made to the Edward Hamada Scholarship Fund at ‘Iolani School.

Recollections of an Immortal Coach

This is an excerpt from a remembrance by Dale Lee ’66 at the memorial service on January 31. Lee played football under Hamada and is now Chief Operating Officer/Senior Advisor for the William S. Richardson School of Law

“One Team” is a multi-faceted axiom, easily transferred to the venues of athletic endeavor, but first and foremost, it is an approach to living, that finds its foundations in a deep, broad humility, a commitment to an ethic of honest effort within the bounds of God-given talents and abilities, and an abiding respect for fellow man.

“One Team” was seemingly a blueprint for how Coach Hamada lived his life, and should be an inspiration for all of us in our own lives. It is fitting that ‘Iolani School has adopted the axiom for itself, for its students and for all eternity.

Consistent with the living of “One Team,” beyond his children Eddie, Jr. and Tane, and his four-legged “kids,” if Coach Hamada had any favorites they were the young men and women who went to practice each day, who participated in all of the drills and who prepared themselves mentally and physically, but who on Game Day did NOT get to play in the contest. 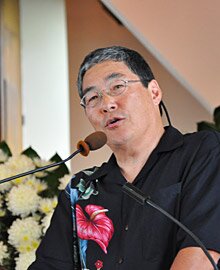 Dale Lee ’66 recalled how quiet the bus rides back to campus were after football games, regardless of losing or winning. See more photos »
It was the year 1965. Theretofore, for fourteen consecutive seasons, for fourteen straight years, after every Punahou – ‘Iolani football game, the cheer from the ‘Iolani side of the stadium was “Wait until next year.”  Then, lo and behold, fortune smiled upon us, and we won one.

For those of you who played under Coach Hamada’s tutelage, this will be familiar: After the game we exited the stadium and proceeded to a waiting, darkened bus where we sat, heads erect, facing straight ahead, in complete, total silence even as supporters pounded the windows of our bus in jubilation – no one needed to be told: “Lights off, Helmets on, No talking.”

That scene was repeated after every game, “win, lose or draw,” over all of the years that Coach Hamada mentored ‘Iolani football teams.  It was a constant – there were no high fives, there were no Gatorade showers for the Coach, there were no piles of self – congratulatory players in celebration on the field.

“Play and stay within yourselves,” we had been taught. “Think about the young men on the bus on the other side of the stadium and how they are feeling – we respect them.”

That 1965 season concluded with more wins, and several losses, but at its end we were selected to play in the first game of a Thanksgiving Day Doubleheader at the old Honolulu Stadium. It was a tradition of sorts in those days, matching the first four teams of the old ILH – it was akin to a Bowl Game at the collegiate level that we are familiar with today.

Our opponent on Thanksgiving Day was to be Punahou – again. We were to play the Buffanblu, a second time.

We prepared diligently for that game, as we did for all others. After one of our practices during the week before the game, Coach Hamada visited our locker room. He did not often come into the locker room and I, for one, sensed something important would be said. 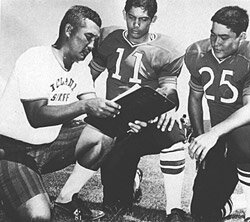 Coach Hamada reviewed a play with Stu Hanchett ’66 and Dale Lee ’66 during the 1965 season. See more photos »
He had a question for us: “You discuss it, you decide, and you let me know what your decision is. I’ll be waiting outside. Gentlemen, do you want to play to win or do you want everyone to play?”

We were just a group of schoolboys but we had been tutored well, and our team discussion was brief – and our answer, unanimous. We summoned Coach back into the locker room and told him,”Coach, we want everyone to play.”

My teammates and I - there were about 40 of us in all – will remember our now immortal Coach Hamada’s words until the day that we die. Coach shook his head and fumed, “That’s the wrong answer!”

What a motivator! He wasn’t called the “Silver Fox” for nothing. Add to the appellations of Teacher, Coach, and Friend, also Winner.

Coach, you did. You did, indeed. Rest in Peace. Aloha. 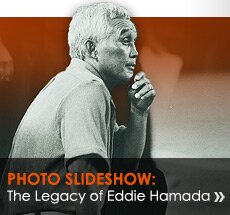