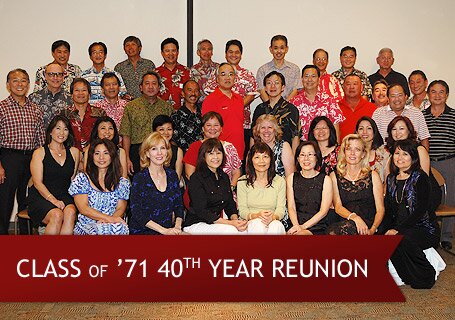 
You know that thing about “What Happens in Vegas, Stays in Vegas?” Well at our age, I’m having a hard time remembering what happened! So, if some of what follows isn’t exactly the way things occurred, too bad. Next time, someone else write the article.

A few way-too-anxious classmates took the red-eye on a Wednesday night to get an early start on the weekend. Dennis Nagata (He is one of 17 dentists in the Class of ’71. It  just seems like there are that many in the Class.) and Dale Nishikawa found themselves at the Bellagio surrounded by extremely muscular women and men who were in town for the Mr. and Ms. Olympia Contest, which is the Super Bowl for professional bodybuilders. They weren’t kidding when they said everything (and every body part apparently) is bigger in Vegas. President-for-Life Lloyd Nishimoto and his ever-patient wife Fay, also early Thursday arrivals, spent the evening at the Donny and Marie Osmond show and raved about how much fun it was. Nutrisystems  has done wonders for Marie, who lost 50  pounds, and she has now officially replaced Annette Funicello in my Fantasy League. What?!  You have your Fantasy League and I’ll have mine, thanks.

I found out that we almost lost Dr. Donn Tokairin before the reunion as a defective fuel gauge erroneously convinced Donn that he and his wife Judie were about to run out of gas in the middle of Death Valley.  In true ‘Iolani style and using all of his finely-honed medical-school trained brain cells, Donn shut off the A/C, turned off the radio (does the radio use gas, Donn?), and rolled up the windows to, as Donn put it, “minimize wind drag.” Of course, the temperature in the car probably reached 120 degrees which is why we almost lost Donn, as Judie was extremely close to causing him severe bodily harm. 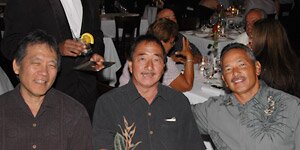 Keith Kaneshige, Randall Hayashi and Kenny Krumm at Il Mulino Restaurant
Friday saw the start of the “official” events with a golf tournament set up by Doctor “Where Did You Get That Smile” Nagata at Primm Valley Golf Course. Great weather, great company, and scores that confirmed that we are all working way too much, were the results of the day. Hey, they were rented clubs, okay?  Retired Fire Captain Kenny Krumm however has no excuse as he is living the carefree life of a, actually, I don’t think Kenny ever told us what he does now. Kenny? The big winner was Dr. Clive Otsuka who played with a 20 handicap. Only later did he reveal that he was on the ‘Iolani golf team! Keith Kaneshige, however, had the best idea. He stopped playing after a dismal nine holes, and proceeded to drink beer and drive the golf cart for the rest of the day! Yes, this is the guy who works on the subs at Pearl Harbor that we depend on to protect us. Hopefully, he doesn’t use the same approach at work! 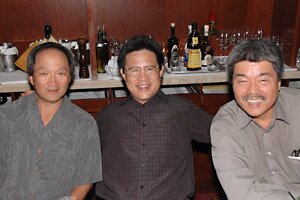 Bruce Masatsugu, Allen Wong and Howard Matsuba at Il Mulino Restaurant
Things continued to get even better with our dinner that evening at Il Mulino (in the Forum Shoppes at Caesar’s). Two dozen classmates and wives showed up for what was a great evening of food, wine and camaraderie. A truly great dinner was followed by Randall Hayashi taking some of us into the casino where we learned a table game, I think it was three card poker, at which most of us, George Mansho being the exception, lost money. Randall was responsible for getting us great deals on hotel rooms however so the fact that he led us like lambs to the slaughter was probably part of his deal.

Dr. Howard Matsuba, living in California made it the Daily Double by attending both the Honolulu and Vegas gatherings, while Neil Uyemura, still impersonating The Great Gatsby since his Brown University / University of Chicago days, left his wife Jan in Portland to hang with the boys in Vegas. He claims that she wouldn’t leave the dogs. Sadly, we believed him. 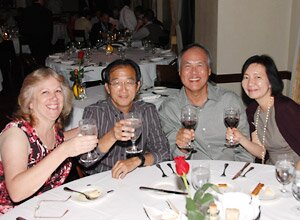 Judie and Donn Tokairin, Clive and Mari Otsuka at Il Mulino Restaurant
It should be pointed out that the five wives who attended the dinner, Debbie Howe, Fay Nishimoto, Mari Otsuka, Judie Tokairin, and Jennifer Wong, emphatically disproved the myth that ‘Iolani boys, at least from the pre-coed days, were incapable of “getting the girl,” as they definitely lit up the room and made all of us look good.  Thanks ladies.

Wait, I almost forgot to tell you how President Lloyd offered to drive us from the Paris Hotel and Casino to Il Mulino and got lost trying to find the shortcut (I mean, really, you can SEE the Forum from Paris) and because we were already late, after taking a tour of the industrial area on the OTHER SIDE OF THE FREEWAY, dropped us off to park the car and showed up about 45 minutes later, halfway through dinner. He made excuses about having to park on the other side of the Forum and walking the wrong way, along with some other equally lame sounding reasons. Later I heard rumors that he had been abducted by female bodybuilders, but that might be another “Stays in Vegas” story. He did look a little disheveled however when he finally did show up, although he was grinning.

Outside Lagasse’s Stadium were, left to right: Keith Kaneshige, Bruce Masatsugu, Adele Inouye, Isaac Inouye, Randall Hayashi, Neil Uyemura, Mari Otsuka, Bob Shimizu, Clive Otsuka, Cyrus Tamashiro, Dale Nishikawa, Sonya Chung, Francis Chung, Dennis Nagata, Marian Kunihisa, Allen Wong, Glenn Kunihisa, George Mansho, Donn Tokairin, Grant Howe, Judie Tokairin, Lloyd Nishimoto, and Kenny Krumm.
We saved the best day of the Reunion for last as we took over Luxury Sports Box number 3 at Lagasse’s Stadium at the Palazzo Hotel, all Saturday (and night!). Now, picture the ultimate man cave, with a couple of large flat screen TVs, a pool table, leather sofas, private bathroom, and your own mini-casino with black jack and craps tables.  Sounds awesome, right? Thank you to Cyrus Tamashiro for making it happen, and showing us what the next addition to our homes (at least those of us without a wife) should look like. Cyrus was definitely in his element as he coordinated the whole day to perfection with buffets for brunch and early dinner as well as impeccable service from the waitstaff. Robert Shimizu, Dr. Allen Wong, Bruce Masatsugu and George Mansho looked like they were having fun pretending they were good at shooting pool. 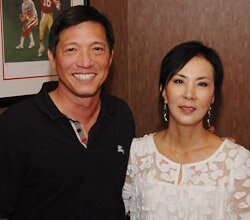 Francis and Sonya Chung at Lagasse’s Stadium
They actually did look good hanging around the pool table though! Joining us from California for game day were Isaac and Adele Inouye and Francis and Sonya Chung, along with Glenn Kunihisa, his wife Marian and sister-in-law Bea Okuda who lives in Vegas. Francis is a pharmacist and owns a Yogurtland franchise so maybe the secret to his looking so youthful is taking the right pills and eating lots of yogurt? C’mon Francis, give us the scoops! Bill Hillendahl, also now living in California where he owns a property management business, served as the unofficial reunion photographer and got Steve Glanstein on the phone to say hello. Steve has a thriving Parliamentarian business in Hawai‘i, although at the time of the reunion he was vacationing in Florida.

Jordan and Jennifer Wong showed everyone how the upper crust dresses as they made a cameo visit on the way back from seeing “Phantom of the Opera” that evening. They looked smashing and obviously knew something the rest of us didn’t as they didn’t even plan on watching the game. 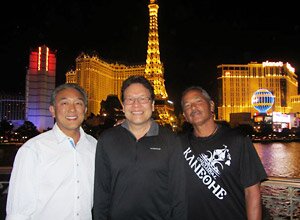 Glenn Kunihisa, Grant Howe and Kenny Krumm with the Paris Hotel in the background
Dr. Mari Otsuka deserves special recognition for parking herself in front of the TV all day to watch the games. No shopping, no eating, no nothing, just football! OK, she might’ve eaten something, but get this, she’s an even bigger baseball fan. Dr. Clive, you are a lucky man, just like you kept telling us on the golf course with your 20 handicap!  A few of us took advantage of the veranda to partake in cognac and cigars (Mr. Lee! Mr. Lee! Glenn Kunihisa was smoking!). Like President Bill, we didn’t inhale (no Monica jokes, please) so it was OK. After completely depleting their stock of Hennessey XO, we got upgraded to the Paradis at no extra cost. One of the biggest “wins” of the trip for some of us!

Oh yeah, I think UH was playing UNLV on TV or something, but I forget.